Header
Home About Us Harps Other Instruments Events Resources Contact Us

Stoney End was born some thirty years ago when an unfullfilled cabinet maker named Gary Stone found a passion for making musical instruments. He purchased a small music company, moved it to Red Wing, Minnesota, and began applying his woodworking craft to dulcimers and harps. As the business grew, the entire Stone family became involved in the store operation.

How Stoney End got its name

At the time the Stone family entered the music business, they lived on a little dead-end road in rural Red Wing, Minnesota. The Stoney End name is a combination of their family name and that tucked-away road.

How Harps Became our Specialty

When Stoney End began, mountain dulcimers were our focus and we had only one harp design—the Lorraine harp. But over time, Gary Stone added more of his own harp designs, each named to honor an important female friend or family member. Harps eventually surged in popularity, overtaking the dulcimers. Harps have remained our focus and we have since made them for musicans all over the world. We strive for excellent quality and continue to introduce new and innovative designs.

In 2001, we relocated Stoney End to its current home in Red Wing, Minnesota. Nestled in woodlands near the Mississippi River, our workshop, retail store, and concert hall are all housed in a restored agricultrual barn rich in character and surrounded by natural beauty. Our staff of five expert luthiers—or harp-makers—handcraft all of our instruments with the finest materials and quality and we are proud to musically enrich the Red Wing community by hosting events, concerts, and festivals. 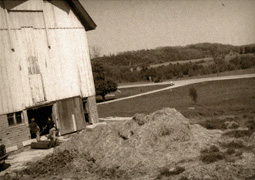 To begin restoring the barn, years worth of hay and other accumulations first had to be cleared. 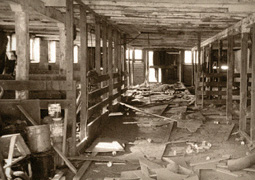 Originally a barn for show cattle, the animal pens were torn down to make way for our present-day workshop. 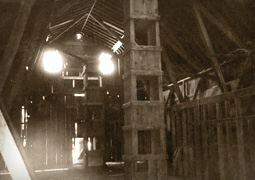 The barn’s original hay loft, which now houses our third-floor music loft for concerts. The design incorporates the hay chutes from the early days.